MASTERING YOUR OWN MIXES: IT'S NOT THAT HARD

Amongst all the mysteries in the business-of-recording-music there is one that strikes fear into the hearts of musicians and artists the world over to a much greater extent than just about anything else. Especially if you are a so called "indie" musician or artist. That scary monster is called "mastering". As in: what you do with a track after you've recorded it and mixed it and want to put it out. How do you get it to sound "professional" and how do you get that elusive loudness that makes it sound so cool on the radio? 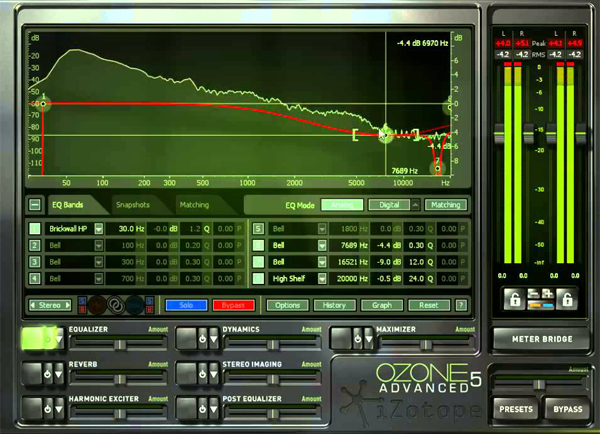 A lot of people use something like the Izotope Ozone's brick wall limiter. The purpose of this thing is to put an absolute limit on how loud your signal can get, thus the term "brick wall". In the never ending pursuit of loudness this kind of program has become common.

For one thing it's expensive and I already own a couple of pieces of software that can do the job just as well.

One is Adobe's Audition and the other came with my old copy of Apple's video editor Final Cut Pro 7 and is called Soundtrack Pro.
While Audition is pretty cool and works fine, and even has a "Mastering" section in its' effects list I prefer, at the moment, to use Soundtrack Pro. Unfortunately STP is no longer being made but all of the major audio recorder, editing platforms work similarly when it comes to mastering. And really STP was meant to be used by folks doing extensive audio for television and movies not music. But that just shows you how these various pieces of software all work very much alike.

Other brands of Mastering software include products like Sound Forge Audio Studio, Presonus, Steinberg Wavelab and Wave Mastering as well as the above noted Ozone.

Despite what people will tell you about how you absolutely MUST have your tracks mastered by a professional mastering engineer---I'm here to tell you that you CAN do it yourself. Here's the basic process.

1. Mix the track to a 2 channel stereo file. I just mix down to 44.1khz sampling rate at 16 bit, otherwise known as CD quality. When you record your mix set the levels to fall around -6 to -12db which will leave you plenty of head room to work on the mastering. In other words don't try to peg the volume all the way to 0db. Leave yourself some room to work.

2. Grab a general all purpose Compressor from your software's list of dynamics processors and activate it. You should immediately hear a noticeable bump up in volume. Probably about 3db or so.
The key here is long attack times and long release times. Short attack and release times could induce "pumping" of the audio and you don't want that.

3. Next place an EQ into the chain and make any small adjustments you want to make. If you've recorded the track properly to start with this should be very minimal. You shouldn't try to rescue a bad mix with EQ during mastering. This is just to put maybe a little extra sparkle on the high end (because often compressing the signal lowers the highs) and to pump up the bass just a db or two. Shouldn't be any huge change. Less is more. And you might not need to do anything at all. Be very thoughtful as you listen to your mix: Do you really need to change anything? Why? Have a reason for anything you decide to do.

4. Now place a Low Pass filter after this and cut everything below 30Hz. This frequency and what's below it is pretty much not something humans can hear. You might be able to feel it if you're in a big club standing in front of 10 foot tall speaker grill but your ears don't process signals that low. Not really. Anyway the Low Pass filter will get rid of any rumble or sub-sonics which could make the mix sound muddy.

5. At this point you could add a Multipressor---which is a type of compressor that allows you to individually adjust about 4 or 5 sections of the frequency spectrum. Kind of like an EQ for Compression.
Sort of.

For EQ and Compression Apple's Multipressor works great. The thing is it might be too much. You might not need it. But if you do need to go in and make a surgical adjustment this can help you do that. You can adjust the bass separate from the mids and the high end---or not. Again this step is in my opinion possible overkill as you shouldn't need it if you recorded and mixed properly. But lots of artists will screw around with a Multipressor at this stage of the process just because they can. This is potentially dangerous. And plenty of them will ruin their mix at this point. Again listen closely to your mix. Do you really need this thing? If not skip it. Sometimes simple is best.

6. At this point you could also add in an effect that falls into the Spatial control category. Sometimes it's called "Stereo Spread" and what it does is add depth and openness and a more panoramic feel to the track that might not have been there before. The one rule with Stereo Spread effects however is don't apply it to the mids and bass end. Apply it only to the upper part of the audio spectrum. If you use it on the bass you WILL get a muddy bottom end and that doesn't sound so great.

7. The final stage is the above-mentioned "Brick Wall Limiter". Set it so that it's maximum output is -0.1db or maybe -0.2db. Meaning that this is as loud as it can get. Period.

A lot of the old time mastering guys would set this to -0.3 but that's probably not necessary these days. But what this will do for you is maximize loudness while not allowing the signal to clip. When you put this thing into the chain of processors and then look at your VU meters you should see the signal definitely banging right up against the top of the allowable scale. Not into the red but up very close to 0db. It's actually being stopped just shy of that. -0.2 is just shy of 0db. It's a fraction of a decibel. On high energy rock or dance tracks you should see on your VU meters a little bit of bouncing back down off and on to around -6db.

Basically what you've done is take your very wide dynamic range original, unmastered mix and you've compressed it so that the quieter parts get about 3 or 4db louder and the very loud transients such as snare drums are brought down several db and that has now allowed you to bring the whole mix up---but confine it so that it can't go higher than just barely below 0db. You've squeezed it. And it is this audio squeeze effect, which many of us learned to love from vinyl records ages ago, that gives even modern day recordings a sense of professionalism. The compression glues the individual parts and sounds together into a coherent whole. Without the mastering your mix will sound dull, lack punch and will not achieve a professional level of loudness.

The difference between properly mastered and not-mastered is largely that feeling of compressing the signal, removing some of the dynamic range and packing the signal into a more compact space. Then raising the over all loudness. Since you brought those loud, unruly snare drum transients down you now have more headroom with which to raise the entire track's overall volume and thus it gets LOUDER. Quite a bit louder.

For more in depth discussion of these steps commonly used in mastering check out THIS ARTICLE. Or this article called HOW TO MASTER A TRACK IN 15 MINUTES OR LESS.

Oh and make sure you have really good professional speakers AND also a pair of shitty ones. Why the shitty ones? Because if you can get the mix to sound great on crappy speakers it will sound amazing on expensive ones.

If you have to mix using headphones (which I very often do because I'm up late at night and don't want to disturb my neighbors) then invest in the open-cup pro level kind. There are closed cup headphones and open cup headphones. You want the open ones because the closed cups will wreck your bass and you'll react by bringing the bass down lower than it should be. Later you'll hear your mix in a car or at a friend's house and you'll be asking yourself why your bass is so low. It's because those closed cup headphones tricked you into thinking that you needed to bring the bass down. Common mistake.

Open cup headphones, on the other hand, actually allow some of the audio to intentionally leak out but they are generally far more accurate. By letting some of the sound escape the bass is prevented from sounding artificially louder than it really is. You want accuracy. That's one of the cardinal rules of mastering. You want is a nice wide (20hz to 30khz frequency response---or thereabouts) and you want that response flat. No areas of over emphasis. Nice and accurate.

I personally use a pair of AKG 701s because they're amazingly accurate and transparent. I highly recommend them. These are not meant for head bangers who just want tons of artificial bass. They are meant to be accurate across the entire audio spectrum. If you use inaccurate headphones you will get an inaccurate mix.

Obviously there is a lot more to this topic but it's nothing you can't learn on your own using Google.
I hope this helps the budding do-it-yourself mastering engineers out there. It's really not difficult once you understand what you're doing.