HOW TO RECORD AN ALBUM IN YOUR BEDROOM

These days there's no reason why you can't record a full blown album in your own bathroom, if you know what you're doing. Actually, I wouldn't try it in a bathroom because there's never enough electrical outlets in there.

Below is a view of SONAR's X3 sequencer---this is the software that I use pretty much all the time to make music. Yeah, I know it looks complicated but in reality if you record all the time---you get very used to it and you never really use everything that's available to you because you just don't need to. 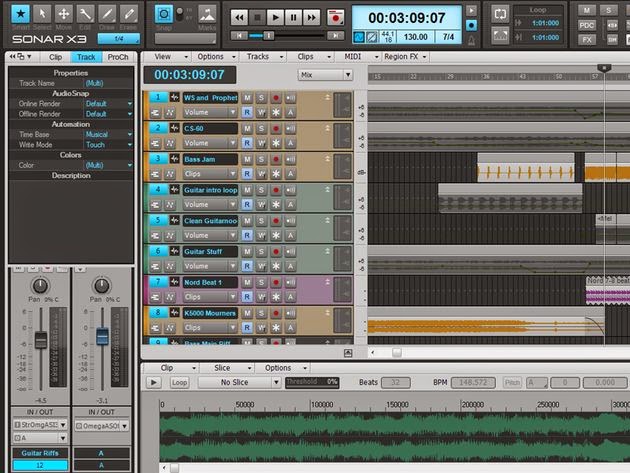 The software and equipment that's available today is nothing short of stratospherically amazing. Just incredible stuff. When I started recording years ago I had to work on great big multi-track tape machines and THAT was a huge pain. Yes, analog has a nice fat sound but you could work for months on something and then get a little drop out in the tape and the whole thing was ruined. These days it's all digital baby. And digital is definitely the way to go. Specifically the invention of MIDI as a way to control instruments and send signals back and forth from keyboard to computer to synth modules has made creating incredibly complex dance and techno tracks not so difficult.

What is MIDI? Check out Wikipedia's excellent page

Every track I've ever released has been recorded in some kind of home studio. I have worked in "real" studios from time to time but I prefer to work alone in my own environment and at my own pace. This way I can just freakin' go crazy and experiment until I'm blue in the face.

If I feel like getting up in the middle of the night and recording a track stark naked, I can do it---not that this is a common occurrence. But this kind of freedom makes for a very flexible working method. When an idea strikes, there's no wasted time booking a room at some big, high-priced studio. I can lock myself away for hours or even days and not have to worry about time or money.

t the keyboard. If you're a truly musical person this is all you really need to do to get ideas. Producing the ideas is another matter - but coming up with musical phrases and progressions is automatic for a musical person. For me it's never been hard to think of ideas - it's been much harder to weed out the boring ones or melodies that sound too familiar and work on the ones that are actually good.

Another "method" that has yielded some great tunes is dreaming. As in going to sleep and dreaming music. This happens to me a lot and has for my entire life - even before I got interested in composing music. In the last decade or so I've had a number of instances in which I have gotten up and staggered to the computer in the middle of the night and come up with quite usable stuff. I then go back to bed. Later I check out what I came up with in that dream the night before and if it's good then I'll work it up further and see where it goes.

The keyboard I use the most is an old Roland D5 and nearly half the keys in the upper range are broken. I've banged the shit out of this poor thing for years so it's pretty busted at this point. But I still use it as my controller. Even so, because so many of the keys are broken I have to play everything on the lower octave and a half. If I need something higher I transpose it through the software
on the computer.

Most of my tracks originate from this "fooling around" stage in which everything that I play is recorded into a computer. If I hear something that I like then I might stop and play it back and proceed to start adding other parts and developing it further. I almost never start out with lyrics or vocals. Usually I'm more interested in the music itself, and the lyrics (if there are any) will later be suggested by the way the music feels. However, I do write lyrics all the time and keep notebooks of ideas. But only very rarely have I actually sat down with a completed lyric and then written music to go with it.

Techno productions like "About Your Soul" routinely require as many as 80 or 90 separate channels to be recorded. And I have been known to work on some of my songs for months at a time, going over and over every single note until the music sounds the way I want it to sound. Regarding MIDI technology: I think if Mozart or Beethoven were alive today they would undoubtedly be drawn to this technology in some way. They might continue to use orchestras for public performance but for private composing it's hard to beat a computer.

I used to use digital audio tape during mix down but these days I don't use tape at all. Everything is mixed to hard drives and discs. And sometimes after that the songs get put back into the computer and processed for the final CD. It's a long and complicated process that I wouldn't wish on my worst enemy.

The list of equipment that I have collected over the years is too long to detail here. Plus, some of the stuff I use is sort of like my own personal secret arsenal. I can't give all my secrets away. But I did just buy a Roland MC505 Groovebox and I'm using that a great deal on tracks being prepared for new releases. I also just added a TC Electronics Finalizer Express for mastering. A very partial list of the rest of my studio equipment would go something like this: